Ian is a Star!

My friend Sharon Dixon's daughter Melody and grandson Ian are appearing in the Crighton Theater's production of "Cheaper by the Dozen" ...

Melody is an experienced actress, and Ian is a born actor if ever there was one, and I just had to show this page from the article in the current issue of Dock Line Magazine. I've repeated the copy below, in case the text is too small to read in the reproduction.

(Ian's little brother Robben is every bit as cute and smart, but just not quite old enough yet to participate!) 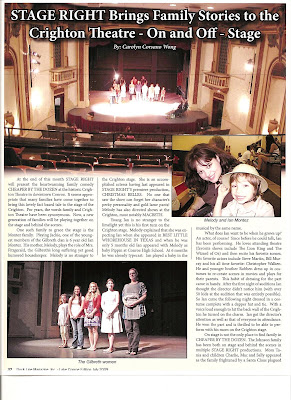 At the end of this month STAGE RIGHT will present the heartwarming family comedy CHEAPER BY THE DOZEN at the historic Crighton Theatre in downtown Conroe. It seems appropriate that many families have come together to bring this lovely fact based tale to the stage of the Crighton. For years, the words family and Crighton Theatre have been synonymous. Now, a new generation of families will be playing together on the stage and behind the scenes.

One such family to grace the stage is the Montez family. Playing Jackie, one of the youngest members of the Gilbreth clan, is 6 year old Ian Montez. His mother, Melody, plays the role of Mrs. Fitzgerald, the Gilbreth’s long suffering yet good humored housekeeper. Melody is no stranger to the Crighton stage. She is an accomplished actress, having last appeared in STAGE RIGHT’S premiere production, CHRISTMAS BELLES. No one that saw the show can forget her character’s perky personality and gold lame pants! Melody has also directed shows at the Crighton, most notably MACBETH. Young Ian is no stranger to the limelight, yet this is his first turn on the Crighton stage. Melody explained that she was expecting Ian when she appeared in BEST LITTLE WHOREHOUSE IN TEXAS, and when he was only 5 months old, Ian appeared with Melody as Baby Pippin in a production held at Conroe High School. At 6 months he was already typecast: Ian played a Baby in the musical by the same name.

What does Ian want to be when he grows up? An actor, of course! Since before he could talk, Ian has been performing. He loves attending theatre (favorite shows include The Lion King and The Wizard of Oz) and then recite his favorite scenes. His favorite actors include Steve Martin, Bill Murray and his all time favorite: Christopher Walken. He and younger brother Robben dress up in costumes to re-create scenes in movies and plays for their parents. This habit of dressing for the part came in handy. After the first night of auditions Ian thought the director didn’t notice him (with over 50 kids at the audition that was entirely possible). So Ian came the following night dressed in a costume complete with a dapper hat and tie. With a voice loud enough to hit the back wall of the Crighton he turned on the charm. Ian got the director’s attention as well as that of everyone in attendance. He won the part and is thrilled to be able to perform with his mom on the Crighton stage.

CHEAPER BY THE DOZEN runs July 31 – Aug. 16, Friday and Saturday nights at 8 pm with two Sunday matinees on Aug. 9 and 16 at 2 pm. Call the Crighton Theatre box office for tickets: 936-441-SHOW (7469). Check out our websites for further information about us and the Crighton Theatre including our exciting upcoming 2009-2010 season: http://www.stage-right.org/, www.crighton-theatre.com and http://resources.stage-right.org.
Posted by Linda Teddlie Minton at 9:08 PM 3 comments: