I've been thinking today about all the things I'm thankful for ... of course, family and friends are first on my list.  But I'm also supremely grateful for the love and companionship of all the animals and pets who have passed through my life.  My first dog was Frisky; parakeets were Tick, Tock, Amy, and Abby; the rabbit was Hopalong Cassidy (of course); our beloved neighborhood dog Lady innocently killed Hopalong when he escaped, and proudly brought the body to her mistress expecting praise; there was a nameless little green turtle who escaped his bowl, but who we discovered months later alive (he had been hibernating); Snapper the box turtle was our neighborhood mascot; and numerous goldfish were given solemn burial ceremonies at the toilet.

Pfeiffer was the family dachshund who came to us as a Christmas gift when I was 10 or 11 years old.  He was probably a "bargain" because his little tail had a crook at the end.  He loved us with a passion and couldn't bear to be separated from us.  He was also as stubborn as a mule (a dachshund trait) and there are many funny family stories about him.  When my parents moved to Guatemala on business, he went with them, and contracted a disease that paralyzed his hind-quarters.  He had a little two-wheeled cart for a while, and he could go running around that way.  He eventually had to be put to sleep when they returned to the States.  I still miss him.

Buddy and Peaches were my two Siamese cats who loved me for 22 years.  Later, Siamese litter-mates Bouncer, Baby, and Mariah came into my life.  Now, only Bouncer and Baby are left, and they are getting old and fragile.  What will I do when they're gone?  I don't know if I will want the care and heartache of a pet again, but I do know that I will be forever grateful for the love, joy, and companionship that they have given me over the years.  I'm not sure I even know how to live without a pet in my life.  And I'm guessing I probably won't even try.

Don't forget your smallest friends this Thanksgiving.  And have a wonderful holiday.
Posted by Linda Teddlie Minton at 4:13 PM 2 comments:

The Winner of "From Felt to Fabric" is Announced 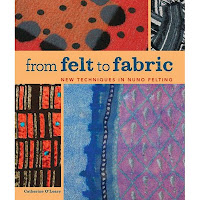 With the helping hand of my Faithful Little Nugget, FiFi the Wonder Assistant, we have once again used our scientifically proven method of dumping teeny tiny little slips of numbered paper into the cat's food dish (don't get all excited, it's just DRY food, gosh!), and stirring them up very well with a wooden spoon.  FiFi then donned her disposable surgical gloves and drew the winning number.

... drumroll, please ... Contestant #6, "Laura".  Congratulations!  Will you please email me at linda.t.minton@gmail.com with your true identity and mailing address.  If I don't hear from you within 48 hours, another drawing will be held.

Thank you all so much for entering ... I hope to have another drawing soon, so stay tuned!
Posted by Linda Teddlie Minton at 12:08 PM 3 comments: