I know a lot of people are doing this, and wondered how they got their cats to sit still for a "Donald Trump Makeover". After giving my boy his nightly brushing, I thought I'd try it. I was amazed that he didn't even notice the little "wig" on his head, although he did look a little grumpy about it! 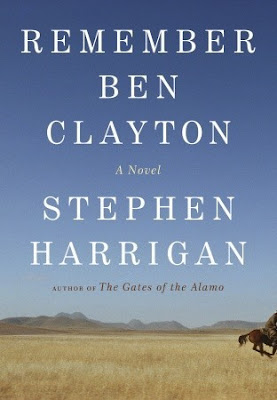 This was recommended to me by two different well-read friends. After putting it off for several months, I finally dived in, and then ended up rationing my reading time over more nights than usual, wanting to stretch out the enjoyment.

Set just after World War I, the gist of the story is about a cantankerous Texas rancher who wants a sculpture made of his son who died in the war. He hires an equally "difficult" sculptor, who brings his adult daughter (who is also his sculpting assistant) to the ranch outside of San Antonio to gather images and information about the young man for the artwork.

Each of the characters is carefully, even lovingly teased out of their shells, to reveal the kinds of inner lives that most of us never reveal to the outside world. Some are the every-day joys and pains that we nevertheless experience alone, and some are devastating secrets that must be held closely, sometimes even from ourselves.

Besides the individuals, there is quite a bit of descriptive narrative about the Texas landscape, as well as about the process of creating a bronze sculpture, which I found fascinating but not too detailed or overwhelming.

These are beautiful character studies of a few individuals who are very different from each other, but in whom we might find familiar traits. Some are understandable, even forgivable, while others I found harder to understand and forgive. By the end of the book I was actually feeling proud of two of the characters. Ultimately, a worthy and fascinating read.
Posted by Linda Teddlie Minton at 6:43 PM No comments: