On Saturday, December 1, Gerald and Debbie Tobola had a Demo Day at their Copper Shade Tree Gallery (http://geraldtobola.com/coppershadetree.htm) in Round Top, Texas. They invited Patricia Daugherty, Jerry Potenza, Dave Hardin and me to spend the day demonstrating our various art techniques to the patrons of their gallery. It was a cool, windy day, and the Christmas Parade brought out lots of folks for the day, so it was a lot of fun. 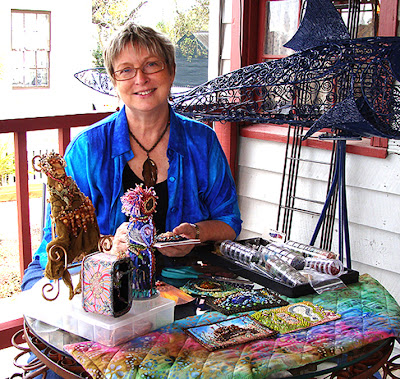 Above is my little demo table with my beads. Along with my Bead Journal Pages that I'm doing for Robin Atkins' Bead Journal Project, I also brought a few of my beaded dolls to show ... "The Fishwife" and "Red Hot Alien Mama". "Tiny Dancer" is just visible inside the polymer clay-covered box. 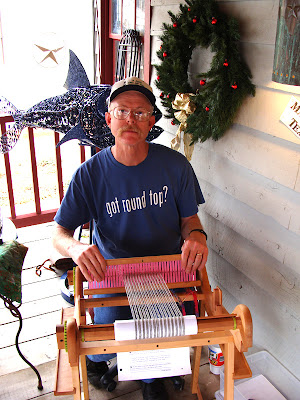 Above is Dave Hardin with one of his smaller, portable looms. He makes gorgeous scarves on this little loom (I have two of them myself). 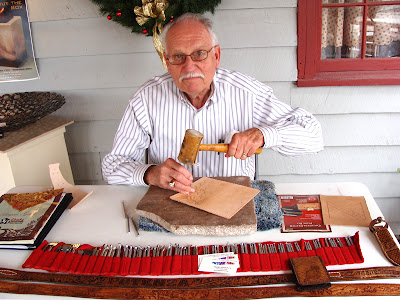 Jerry Potenza, above, did some beautiful leatherwork, and both Patricia and I were also interested in his vast array of specialty tools. He displays and sells his work in the gallery as well. 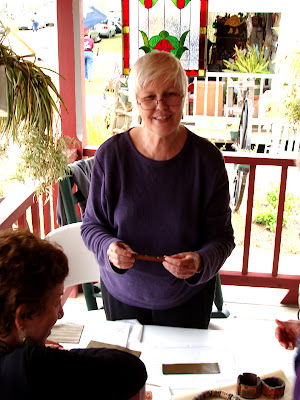 Patricia Daugherty, above, is demonstrating her method of "mokume gane" in polymer clay. She had lots of admirers, and even made some sales of some items she hadn't intended to sell! 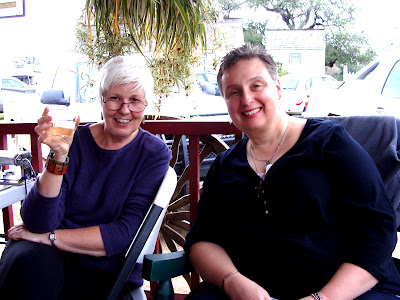 Patricia and Denna, near the end of the day. Denna was sweet enough to go home and make up a poultice for my bee sting ... thank you so much, Denna! (I thought of posting a picture of my sting, but it was too gross!) 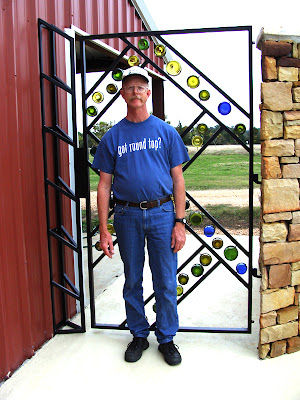 After Demo Day was over, Patricia and I drove out to Dave & Denna Hardin's A Light Unto My Path Retreat (http://www.alightuntomypath.com/) to see the new patio gate that they had had specially made from the bottoms of old wine bottles. It is gorgeous! I made Dave stand in front of it for a picture.
Posted by Linda Teddlie Minton at 3:16 PM 1 comment:

A Round Top Christmas 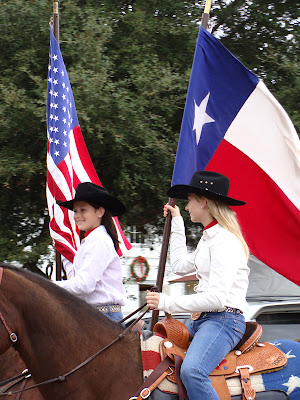 ... does a Christmas parade begin and end with the Texas and American flags, 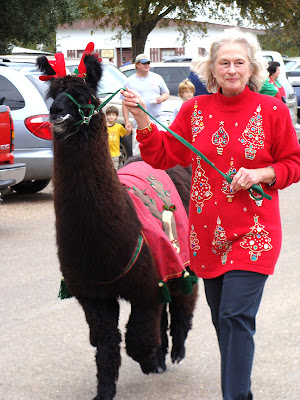 ... include not one but two llamas, 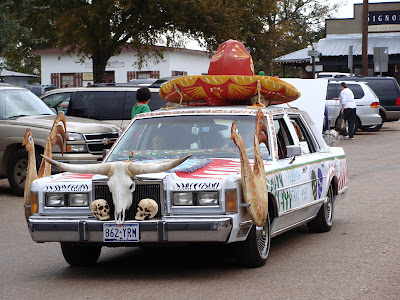 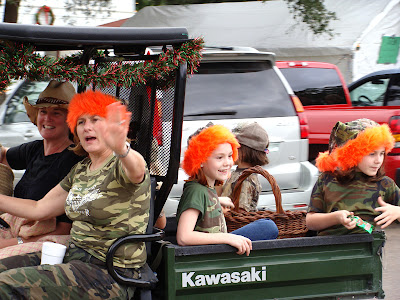 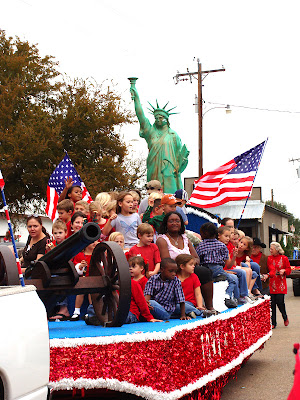 ... and end with a Civil War-era cannon, the American flag, and Lady Liberty! 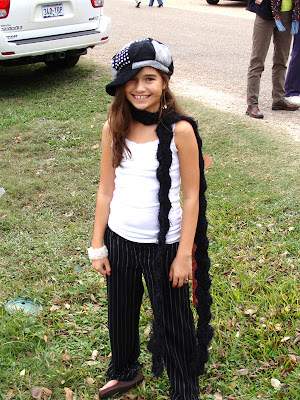 Last but not least, I just had to take a picture of this adorable little girl, the daughter of a local artist. Looks like she's inherited her mother's sense of style!

This was a lovely town parade, with most everyone participating. The town square is so small that the parade had to go around several times, so it would last a little longer!
Posted by Linda Teddlie Minton at 2:52 PM No comments: 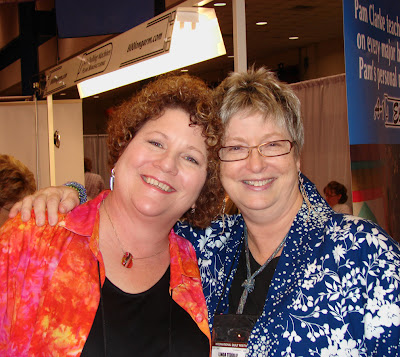 Lynn Douglass and me.
Lynn is an A-1 Longarm quilting machine dealer with a cool blog at http://lynndouglass.wordpress.com/ Lynn with her Journal Quilt
Posted by Linda Teddlie Minton at 12:51 PM No comments:

Even though this is such a blurry picture, it's the best one I have of Tommy and Sharon Dixon's annual country concert, and so just have to post it anyway. Their son Jared and their friend Pat plays with Tommy, and Sharon sings several songs with them. The atmosphere is always fun and funny, and children are allowed only if they are too young to understand the sometimes rowdy humor! I look forward to it every year, and this year was especially wonderful since we almost lost Tommy last year to some health problems. He's doing great now, and we were all so happy to have something to celebrate! 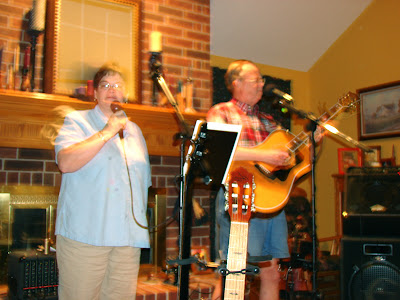 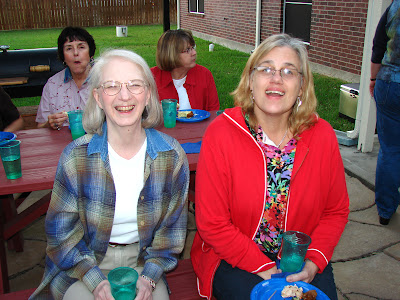 Barb & Betty, above, getting into the party mood, with food and beverage. 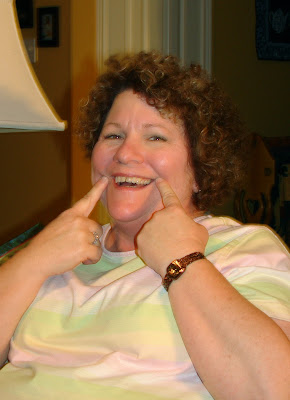 Ms. Lynn is ALWAYS in a party mood!
Posted by Linda Teddlie Minton at 12:36 PM 2 comments:

Oh, and I forgot to post these few pics, from a class Patricia and I took with Grant Diffendaffer, courtesey of the San Antonio Polymer Clay Guild. He specializes in lathe-turned beads ... http://diffendaffer.com/ 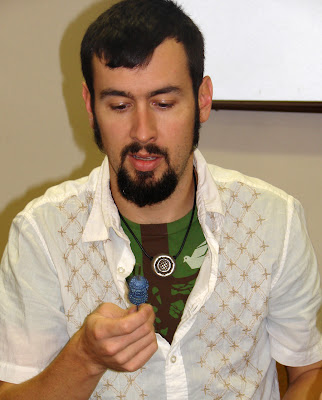 Grant is an excellent teacher as well as a visionary clay artist, and even took the ribbing from all us "older ladies" very well.


me, Grant, and Patricia


Patricia at the River Walk in San Antonio 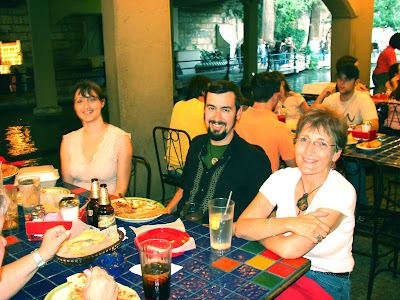 Dinner at the River Walk
Posted by Linda Teddlie Minton at 12:29 PM No comments:

Oh gosh, I'm so late in posting pictures of Quilt Festival, I'm having to go back and start at the beginning.
My friend Larkin Van Horn came into town a week before Quilt Market and we had a wonderful time roaming through a bit of the Texas Hill Country before coming back to Houston in time for Market. Here are a few pics of our lunch out with my friends Sharon, Barb, and Betty, at a local Mexican restaurant. 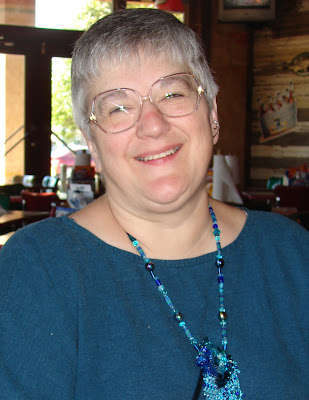 Above is Larkin - she has the most lovely smile, to go along with her fun personality. See her website at http://www.larkinart.com/ 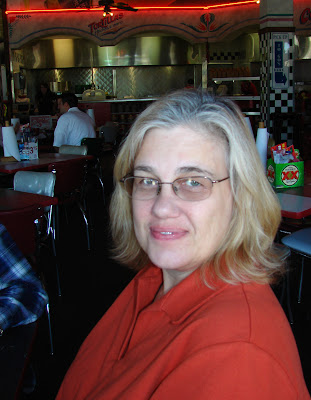 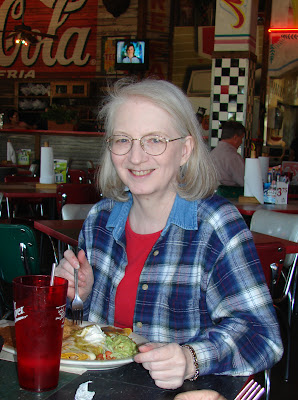 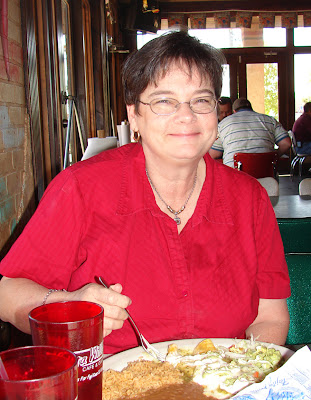 Sharon
Larkin & Linda, "sittin' in a tree"
I'm wearing my "Lizzy the Lizard" purse, hand-made by my friend
Michelle Verbeeck http://www.studio-259.com/ (you can have one too!) 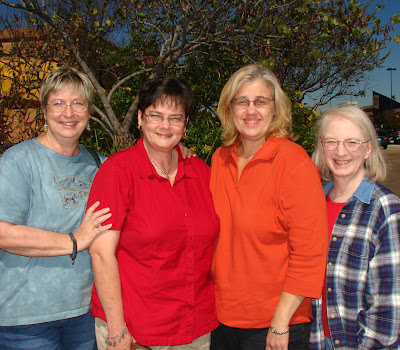