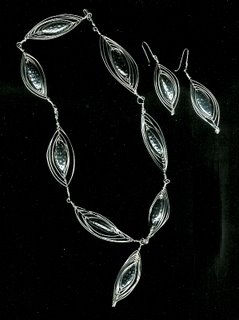 Mary Ellen and I took another class with Nancy Jones yesterday, and here is my result ... it was originally supposed to be a choker, but I added the drop since a choker isn't my best look. I really like the earrings best. The technique is fun and easy, but requires some hand strength. 22-ga. sterling silver wire with black glass beads.

Mary Ellen's necklace and earrings are really the ones I want ... she chose to use some frosty-blue stones with copper wire, and they turned out to be just stunning. Mary Ellen, wanna trade, LOL?
Posted by Linda Teddlie Minton at 10:26 AM No comments:

Make It Do or Do Without 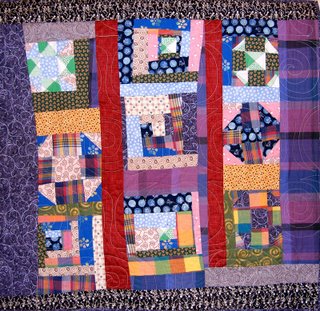 After finally getting to see the Quilts of Gee's Bend exhibit at the Houston Museum of Fine Arts this past week (which was an amazing experience), I was inspired to make some sort of homage quilt. Then I remembered that I actually had already made one ...

In 2001 I took a class with Roberta Horton at the Houston International Quilt Festival, called something like "African American Quilts". The idea was to re-create a small quilt in the style of the slaves who had no choice in fabrics but what was thrown away or given to them, and of course no modern templates, rulers, or rotary cutters. We were to cut our pieces freehand, with nothing but scissors and our imaginations.

She gave us each a pice of "ugly" green fabric that we had to incorporate with the fabrics that we had brought to class, and we made some simple traditional blocks with scraps, 4 of one block and 5 of another. (The two blocks I chose, Log Cabin and Hole in the Barn Door, are barely recognizable.) On at least one of the blocks we were to alter something in the design – turn one of the elements backwards, for instance - to make it different. The strong vertical lines were important in the African influence of the design, as were the varying fabrics for the borders.

I never liked this quilt when I made it, and it has been sort of hidden away ever since. After seeing the Gee's Bend quilts, however, I've pulled it back out, and it now has a new kind of beauty for me.
Posted by Linda Teddlie Minton at 11:34 AM 5 comments: 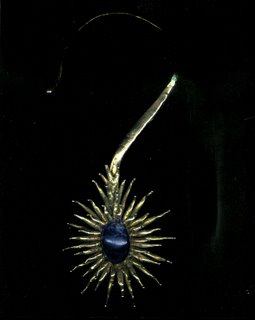 My Dad had this gorgeous necklace made for my Mom, quite a few years ago in Mexico ... he thinks it may have been in San Miguel de Allende. It has a wrap-around collar made to fit her neck, with a large (25x38mm) lapis lazuli cabochon in the center of the 4" x 5" hand-wrought starburst. (For some reason the beautiful veining and the shine of the lapis do not show up well in this photo.)

Both the collar and the starburst are signed (engraved) by the artist on the back. I had the metal tested by a jeweler, who proclaimed it a copper-heavy bronze. The whole piece is very heavy in weight.

I just spent almost an hour cleaning this piece, and want to preserve its beauty for as long as possible before having to clean it again. I've been advised that a lacquer coating is recommended for bronze, but my local jeweler doesn't do that type of work. I'm wondering if a couple of light coatings of a non-yellowing spray acrylic protectant would work, without harming the metal. Or an automotive spray protectant? Of course I would protect the lapis cab first. Any suggestions?
Posted by Linda Teddlie Minton at 10:49 AM 1 comment: