In going through more of the photographs and paperwork from my Mom & Dad's house (they've moved into a lovely new retirement community, but had to downsize considerably), I made this beautiful discovery today.  It's the letter written by my grandfather to his prospective mother-in-law in 1917, asking for my grandmother's hand in marriage. 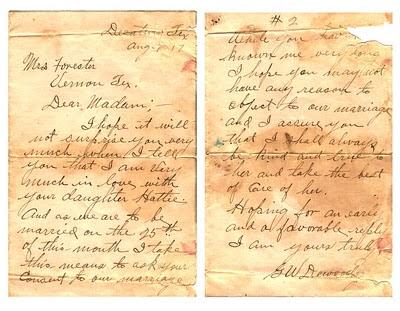 I was so touched by the old-fashioned sensibility of asking for a daughter's hand in marriage ... but upon closer inspection, it is clear that he is stating their intention to be married ... that same month ... and is basically just going through the formality of asking for her mother's consent.  His sentiments are obviously sincere and sweet, though, and I feel so lucky to have found this treasure.  I don't even think my mother remembered having it; at least I never heard her mention it, and I know I had never seen it before.
I even love the discolored and deteriorated condition of the pages!  Thank goodness for scanners and Photoshop, which allow us to preserve such ephemera even as they are slowly disintegrating.  I would urge anyone who has such treasures in their own family to do it now ... preserve copies in whatever way you can ... these precious memories won't last forever.
Posted by Linda Teddlie Minton at 9:03 PM 12 comments:

While at a FiberVoices meeting last week, my friend Susan gave us a little impromptu workshop on Gyotaku fish printing.  Here is the result of my first (and, so far, only) fish print.  He's not perfect (he seems to have a double-chin), but I love him anyway.  Thank you, Susan!
No, we didn't use real fish!  You can buy rubber fish (cast from real fish) and other critters from Dick Blick Art Supply, as well as other places, I'm sure.
Posted by Linda Teddlie Minton at 2:47 PM 8 comments:

... Photoshoppin', that is.  Cynthia (Cindy) Powell, of Digital Montage Studio, offers not only live-on-line workshops, but also downloadable versions of her earlier workshops.  Just yesterday I purchased her Workshop #4, and played with it most of the afternoon.

Here's the first piece I've created from this workshop, which includes stamping, painting, and many, many layers in Photoshop:

I had so much fun with this, and can't wait to get "back to the drawing board" for some more.
Posted by Linda Teddlie Minton at 2:35 PM No comments: