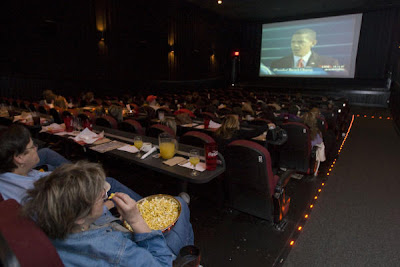 "Linda Minton enjoys a bowl of popcorn while she watches the swearing in of Barack Obama during an inaugural watch party at the Alamo Drafthouse Cinema Tuesday in Houston."
-- Houston Chronicle, 1-20-09

I think the photographer thought it was funny that I was eating popcorn all during the ceremonies. I noticed that almost all the other pictures in the newspaper were of people looking reverential, weepy, inspired, transported on the wings of angels ... and there I am, munching popcorn and drinking mimosas ... LOL! My dear friend Sharon Dixon and I decided that we needed to mark the day by attending a party and watching the proceedings on a big screen. It was great!
Posted by Linda Teddlie Minton at 10:28 AM 5 comments: